Review: Kevin Smith makes a half-baked return to his roots with ‘Clerks III’ 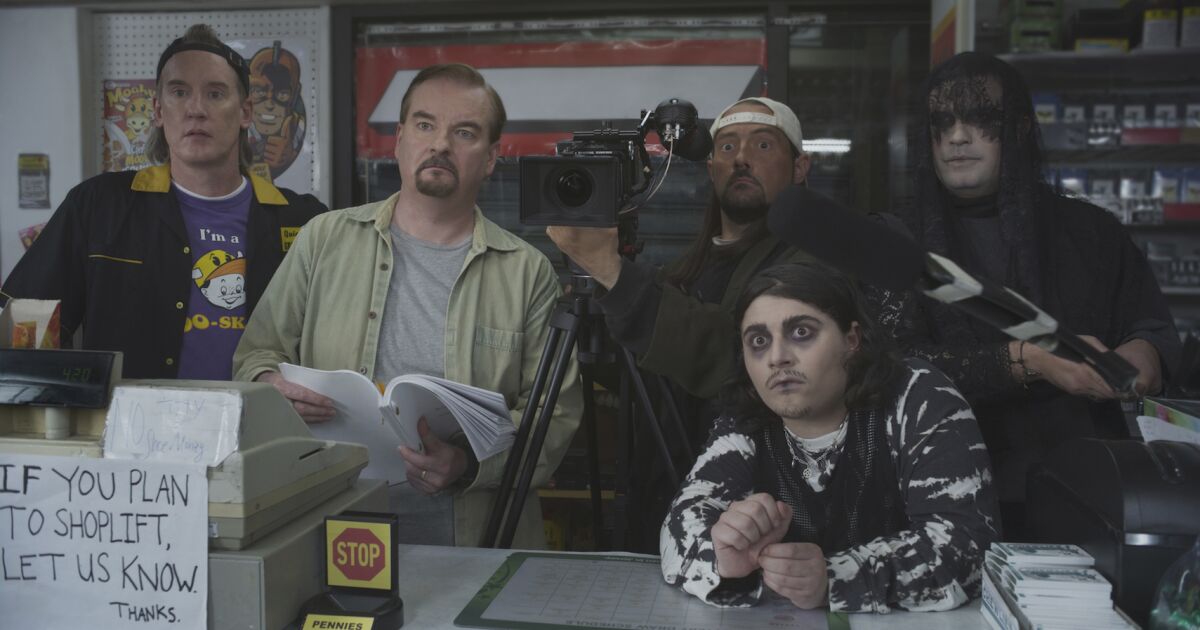 Before “Clerks III” starts feasting on itself like a Cheetos-craving stoner, the discursive punch of Kevin Smith’s return to the crassly philosophical neo-vaudeville of Quick Stop denizens Dante, Randal, Jay and Silent Bob recalls the sprightly ding of a convenience store doorbell announcing a familiar customer.

Of course, that sound can also signify an exit. Existential truth weighs on Dante (Brian O’Halloran) when we learn that his love Becky (Rosario Dawson) has died since the events of “Clerks II.” (Dawson returns for a dream sequence.) But death is a more urgent concern for the nearing-50 Randal (Jeff Anderson) when he’s spurred to midlife reassessment after suffering a heart attack. Writer-director Smith famously survived one in 2018, and the prospect that this personal detail will chart new profanely amusing and emotional territory for these likable ranters feels promising.

Until, that is, Randal’s energized purpose leads him to announce his goal of making a movie about his Quick Stop world, and we soon realize Smith is about to meta-make “Clerks” all over again. The View Askew faithful may lap up the re-creations, cameos, behind-the-scenes lore and legacy riffs, but this universe folding in on itself is hardly funny or enlightening about the creative process, just a self-referential checklist. At one point, Smith as Silent Bob — but really as Smith himself, disparaged director of artless movies — speaks up to attest he’s always understood aesthetics, a wink as bitterly defensive as Woody Allen’s “early funny ones” gag from “Stardust Memories.” (You’d think by now that Smith would make artlessness a badge of honor.)

When he swerves to put mortality front and center again at the end, however, it’s a frank reminder that narrative adeptness and sentimentality aren’t strong suits, either. The emotion grab is understandable but handled like last-second seasoning. One wonders if 90 minutes of purely foul-mouthed, shaming exchanges on religion, crypto, Satanism, sex, aging and pop culture franchises — what was hinted at early on — would have been just as nostalgic, truer to form and possibly more entertaining than Smith’s half-baked bid to remind us of when his navel-gazing was indie gold.

“Clerks III” may not be the last go-round for these characters, but it probably should be if its inability to make inventory-taking richly funny or meaningful is any indication. More of a recognition reel for a fan convention than a movie, it signals a career that’s traveled far from its first evocation of a raw seriocomic intelligence about small-to-bursting lives. Now, it’s a closed loop only for die-hards.

Playing: In general release through Sept. 25 via Fathom Events