Red Bull BC One break-dancing championships are another Olympic signpost 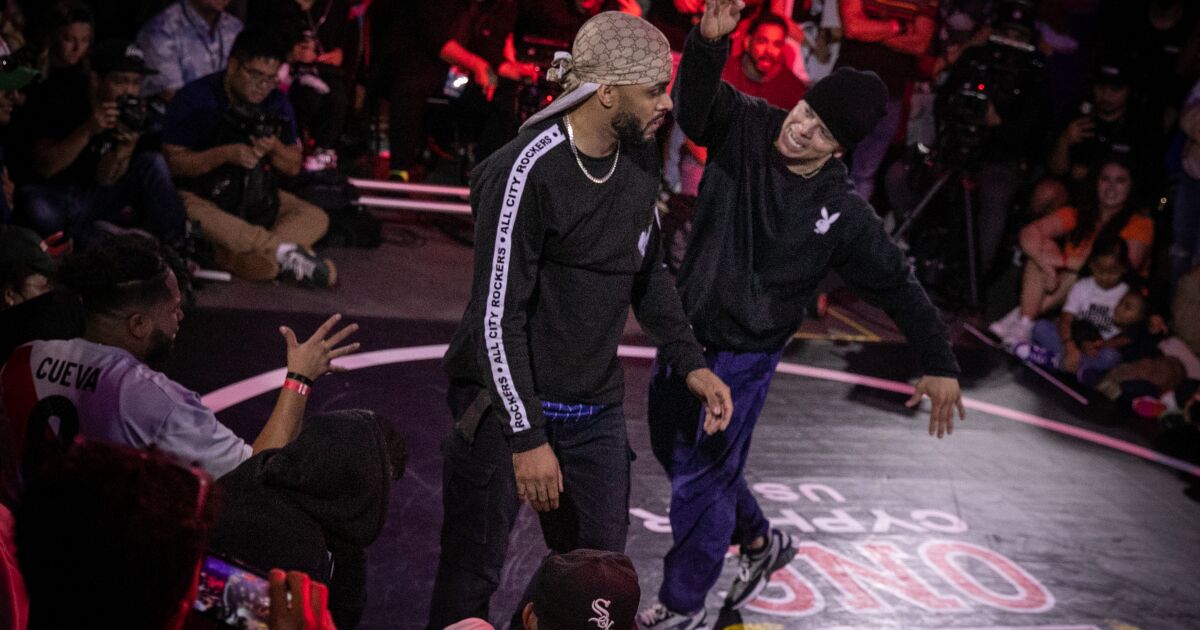 After five regional qualifiers across the country, the Red Bull BC One National Final hit Hollywood on Saturday night with 32 of the nation’s top B-boy and B-girl competitors vying for a chance to represent the U.S. at the world finals Nov. 12 in New York.

At the Eden Sunset, the circular stage was set for a slate of bracket-style dance battles. Competitors and their supporters surrounded the stage and the DJ dropped custom beats for the performers to do tricks, aerials, groundwork, footwork and more while a three-person panel of judges took into account not only athleticism but also attitude and musicality. After some intense battling, B-Boy Ali and B-Girl Sunny took home the titles in the men’s and women’s competitions, respectively.

In the cavernous practice room next door at the Hollywood Athletic Club, performers were focused on stretching and getting specific tricks right, but there were other concerns. The Olympics loom as break-dancing makes its debut in the 2024 Paris edition. Trials are happening all around the country, but Red Bull competitors understand that there’s a difference between the structured athletic competition to be offered at the Olympics and the artistic, attitudinal performances at the Red Bull event. .

“The Olympics is really serious, and I get to just wild out here. There are so many rules of what we can’t do with the Olympics,” said Pep C, a B-girl from Indianapolis in the competition who is also an Olympic hopeful. “I’m doing this for the fun. Red Bull is interesting. You just have to represent yourself. Your approach has to be yours, but you can’t come out like you don’t know what you’re doing. It has to be within the essence of breaking itself. You can’t come in here and do, like, popping. And that’s pretty legit.”

“I’m looking forward to [the Olympics] for sure, but it’s not an end goal,” says B-boy Conrad (Rodriguez), a semi-finalist representing Mesa, Ariz. “I do think that the direction we’re going in is a healthy one. We have to first present what we have to offer to get people interested, then that’s when we’ll educate.”

“It takes, like, 10 years to be on this level, honestly,” says B-boy José from Houston. “[For the Olympics,] people that don’t understand the dance don’t want to see this for three or four hours. They just want to see the highlights and the best stuff. I think it needs to be no crowds until the top eight, then let the crowd come in and give that energy.”

“There’s really been a shift from just local gyms where you can just have fun to where now I have a training regimen and I have a coach and I’m just tapping into that. For me, it’s a balance of getting disciplined and keeping the fun with spontaneous moments,” said B-girl Rascal Randi from the Bay Area. “I made quarterfinals in the national Olympic qualifier. Moving into the Olympics, it’s finding out how to treat ourselves as athletes. We don’t get the rehab and the knowledge about recovery and taking care of your body that a lot of athletes do.”

Here are images from the performances.