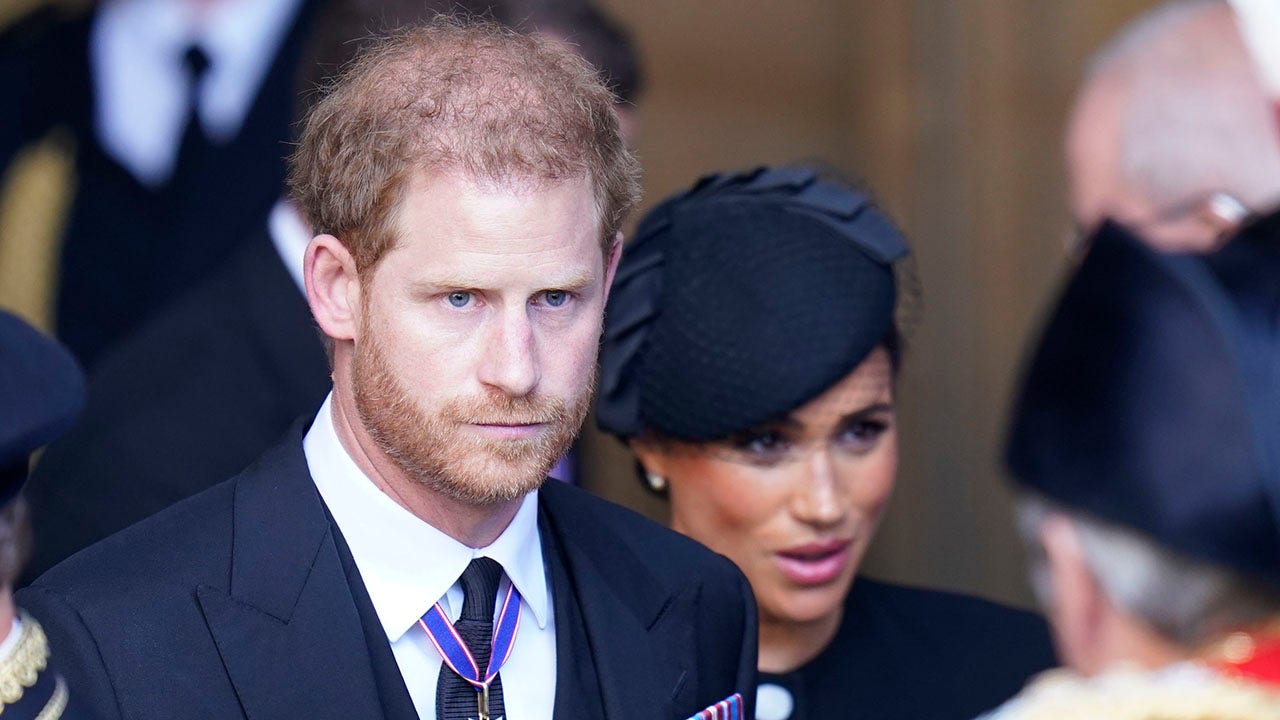 The Prince Harry and Meghan Markle drama continued into the weekend as it wasn’t clear if the Sussexes would be attending a pre-funeral reception at Buckingham Palace on the eve of Queen Elizabeth II’s funeral.

The Duke and Duchess of Sussex – who settled in California after stepping down as senior royals in 2020 – reportedly initially received an invitation to the Sunday evening reception, but conflicting reports said they were and weren’t expected to attend.

According to the Telegraph, they have now been uninvited because palace officials insisted that the reception hosted by King Charles III and Camilla, the queen consort, is only for working royals, which Harry and Meghan are not.

Yahoo New UK reported, however, that despite the reception originally only being for working members of the royal family, an exception was made and the Sussexes are expected to attend.

FOR MEGHAN AND HARRY DINNER IS SERVED, AND ON THE MENU IS ‘REVENGE’: ROYAL EXPERT

Prince Harry and Meghan, Duchess of Sussex, leave Westminster Hall, London after the coffin of Queen Elizabeth II was brought to the hall to lie in state ahead of her funeral on Monday on September 14, 2022 in London, England.
(Photo Danny Lawson – WPA Pool/Getty Images))

The “King and Queen Consort, accompanied by members of the royal family” plan to welcome hundreds of world leaders and royals from other countries, the palace said on Friday. President Biden is among those expected to attend the reception and the funeral on Monday.

There has been considerable tension between Harry and Meghan and the rest of the family – especially his brother Prince William and Kate Middleton, Princess of Wales – since they left the U.K., which wasn’t helped by their tell-all interview with Oprah. In the interview, among other accusations, they claimed the palace hadn’t helped a suicidal Meghan and that someone had made a racist comment about their son, Archie, 3.

The couple surprised the public when they appeared with William and Kate at Windsor Castle last Saturday to thank members of the public mourning her majesty.

SOPHIE’S CHOICE? HOW MEGHAN WAS LEFT SHAKEN BY THIS CAR RIDE: ROYAL EXPERT

Catherine, Princess of Wales, Prince William, Prince of Wales, Prince Harry, Duke of Sussex, and Meghan, Duchess of Sussex on the long Walk at Windsor Castle arrive to view flowers and tributes to HM Queen Elizabeth on September 10, 2022 in Windsor, England. Crowds have gathered and tributes left at the gates of Windsor Castle to Queen Elizabeth II, who died at Balmoral Castle on 8 September, 2022.
(Photo by Chris Jackson/Getty Images)

The four have been seen at subsequent events, including the arrival of the queen’s coffin at Westminster Hall on Wednesday for her lying-in-state.

Meghan and Harry caused a stir as they left Westminster Hall holding hands, leading some to believe they had broken royal protocol on public displays of affection, but royal expert Shannon Felton Spence told Fox News Digital there are no “formal ‘rules’ against PDA.”

But “we don’t often see it from the royals because usually when we see them they are on the job,” Spence explained. “They are presenting their most professional appearance. When we see William and Catherine out, they are husband and wife colleagues.”

Prince Harry and Meghan Markle are expected to attend the Monday funeral for Queen Elisabeth II who died on Sept. 8, 2022, at 96.
(Steve Parsons – WPA Pool)

And while some said the display was inappropriate, others felt Meghan was simply being supportive of her husband who is mourning his grandmother.

“I’ll give them a pass for today when they were walking out of Westminster Hall because that procession had to be very traumatizing for Harry, and they are all grieving,” Spence said.

The couple is expected to attend the queen’s funeral on Monday.