L.A. writer Laura Warrell gave up on love — but never on writing 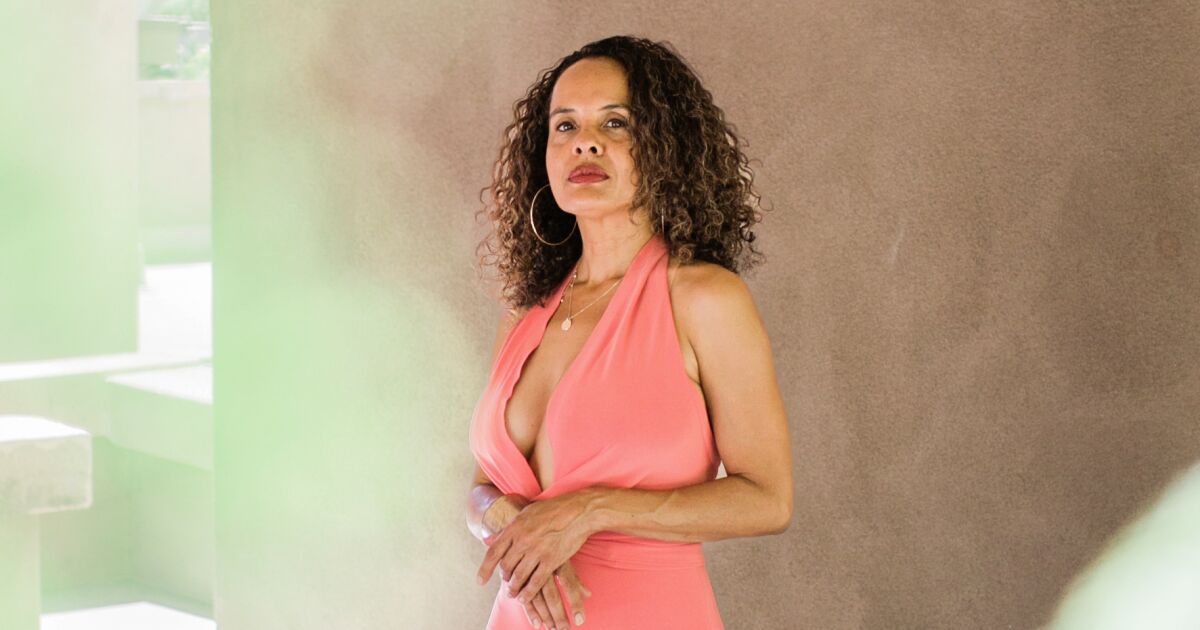 If you buy books linked on our site, The Times may earn a commission from Bookshop.org, whose fees support independent bookstores.

Several years ago, Laura Warrell made a decision to give up on love.

She was in her late 40s, had been married and divorced, and had grown tired of men who didn’t value relationships — who would run for the hills at the slightest hint of commitment. She wrote an essay about her decision in 2019 and has since spent long hours thinking and talking about love: its value, its effect on her mind, body and soul. The essence of it that transcends companionship.

“Love is finding someone with whom you don’t have to translate yourself,” says Warrell, 51 — a line she credited to a friend, the poet Charles Coe. “Love, to me, means creating a safe place for vulnerability to happen.”

She had an outlet for those ruminations because one thing she never gave up on, after decades of persisting and surviving rejection, was writing. It’s been a steady presence in her life since she learned to string words together. She wrote her first book in elementary school, her first novel in her 20s, and she hasn’t stopped since.

Warrell’s debut novel, “Sweet, Soft, Plenty Rhythm,” out next week, is a classic tale of lost and unrequited love, following one man’s series of messy affairs as chronicled by a symphonic array of female voices across social, economic and racial lines.

At the center of this love polygon is the racially mixed jazz trumpeter and ladies’ man Circus Palmer. Around him are the women he charms and devastates. There are many, including but not limited to: Pia, still struggling to overcome her rejection; Maggie Swan, a free-spirited drummer pregnant with Circus’ child; Peach, a kind local bartender; Odessa, who’s haunted by a mistake that can’t be undone; and, not least, Koko, Circus’ daughter with Pia, who pines in a different way for a father at once magnetic and unavailable.

Warrell is all too familiar with the allure of musicians. She’s dated many of them, only to emerge heartbroken or disappointed. Around 2013, after she ended an on-and-off five-year relationship with one, she banished all musicians to her list of “Off-limits Men,” alongside skateboarders and bartenders; these are the guys she’s learned are never going to commit. That was around the time she began writing “Sweet, Soft, Plenty Rhythm.”

Lisa Lucas was far from the first editor to read Warrell’s manuscript. In fact, there were about 30 others. But Warrell was among the first writers Lucas considered acquiring as an editor.

Lucas picked up the manuscript in January 2021 in her early days as publisher of Pantheon and Schocken Books. Hired to reinvent the decades-old imprint at Knopf, she was looking for books that reflected her plans to build a home for diverse worldviews and global voices. Along came Warrell’s book.

“It was a really odd sensation,” says Lucas. “Like, what are the chances of the first thing you read being something that you love this much?”

There’s a lot she loved about it: Maggie and her fierce independence; Warrell’s ability to render different voices without making it about race, class or politics; her intimate observations about love; and the power of her story to hook you in a heartbeat.

“She has a really wonderful sense of how to be emotional and intellectual, but also to be really human and to tell a good story,” adds Lucas. “You’re wondering what’s going to happen, or why a character is doing this. She manages to turn the page — you just want to be with these people — but she doesn’t sacrifice any depth.”

On a recent scorching afternoon, Warrell sits on a shaded bench in La Cañada Flintridge’s Descanso Gardens and spends nearly two hours talking about, among other things, the love of her life — writing. The character in her book she most seems to resemble, in her confidence and composure, is Maggie, the free-spirited drummer.

Warrell’s mother would agree with that assessment. “Maggie is a realist and a person with a strong sense of self,” says Libby Ellis. “And I think that’s Laura. I think she’s the kind of person that probably would have dealt with Circus kind of like Maggie did, which is to say to him, ‘OK, I love you and all, but you’re not good enough for me. I need more.’”

Warrell, not for the first time, disagrees with her mother. She thinks she most resembles Koko. Like the youngest of these women characters, Warrell is a biracial only child brought up by a single mom (born in New York City, raised in Ohio). Her father, whom she doesn’t have a relationship with, was also a musician, albeit a street musician.

And, like Warrell was as a teenager, Koko is very sexual. “I see her as someone who is wonderfully overwhelmed with sensuality that isn’t being received, and so she seeks out ways to satisfy it,” she says. “I did the same when I was a kid.”

Ellis worked long hours, so Warrell spent a lot of time reading and writing in her room. “It concerned me a little bit, but she was the kind of kid that really didn’t mind being alone,” says Ellis. Her imagination was limitless: She’d read to her dolls and stuffed animals and teach them things. She’d write stories about them.

In first grade, Warrell wrote her first book, “It’s Nice to Have a Friend,” about a little girl in pursuit of, well, someone her age. But what young Laura really aspired to be was a movie star. Writing was merely something she did as naturally and routinely as walking.

She let go of her acting aspirations as an undergraduate at Emerson College, opting for the slightly more practical track of professional writing. By the time she was 25, she had written her first real book. She couldn’t get it published. She wrote another. Then another. Then another. No luck. Four novels, a short story collection and 25 years later, Warrell’s moment finally arrived. When she completed a manuscript for “Sweet, Soft, Plenty Rhythm,” she queried 50 agents over the course of two years before she finally met hers.

“I’ve been waiting for this moment my entire life,” she says, “but it has not been a fun journey. There’s nothing glamorous or sexy about it. But it has been a wonderful place to arrive, and I’m incredibly grateful, and I’m really glad that I didn’t give up.”

While settling into the life of a published author, Warrell is also settling into her new home in Los Feliz, where she moved this summer from Culver City. She still has boxes to unpack. She’s taking a break from teaching at Loyola Marymount University and Cal State Dominguez Hills and working on a new book — though she hasn’t yet figured out the beginning. It’s about a love triangle involving a lawyer, possibly an artist and a third woman.

Her feet are already getting itchy, however; Warrell is fantasizing about taking a year or two off to travel around the world. She’s already lived in Europe twice, once with her then-husband and the second time after their divorce. She calculates that she has about 10 years before “my hips start breaking.”

She won’t be actively looking for love in the meantime, but she’ll embrace it if it comes. Either way, she’s unlikely to stop writing about it anytime soon.