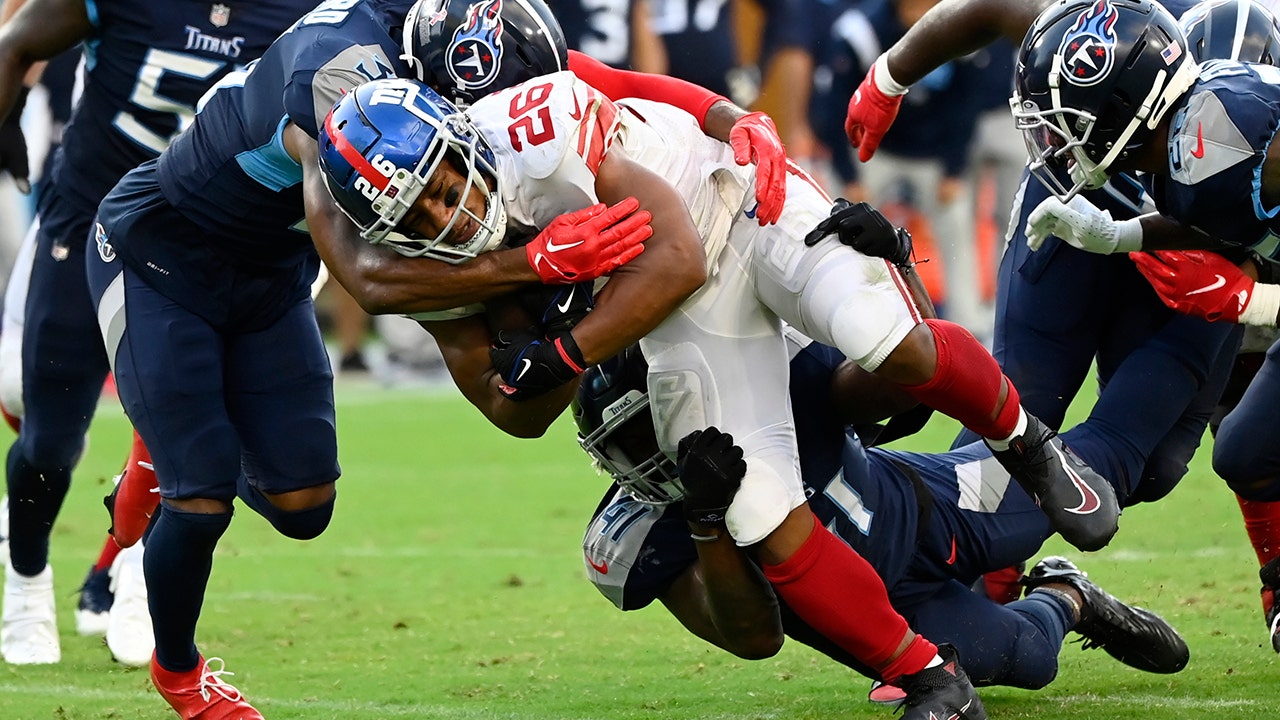 The New York Giants pulled off an impressive comeback victory over the Tennessee Titans on Sunday, starting the regular season off 1-0 for the first time since 2016.

Daniel Jones had two touchdown passes, including one to Chris Myarick at the goal line to cut their deficit to one point with 1:06 remaining in the game. Instead of going for the tie and potentially forcing overtime, rookie head coach Brian Daboll decided to go for two.

Jones found Saquon Barkley for the conversion, and it put the Giants up 21-20.

The Titans would charge back down the field and thanks to a few bad defensive penalties, Ryan Tannehill got the offense in position for a Randy Bullock game-winning field goal. However, Bullock missed a 47-yard field goal and the Giants would win.

New York Giants running back Saquon Barkley (26) celebrates after scoring a two-point conversion run during the second half of an NFL football game against the Tennessee Titans Sunday, Sept. 11, 2022, in Nashville.
(AP Photo/Mark Zaleski)

It’s the first time the Giants started the season with a win in six years. They beat the Dallas Cowboys 20-19 in 2016 — it’s the same year the team last made the playoffs and had a winning record. Before that, the Giants hadn’t won an opening game since 2010.

New York Giants running back Saquon Barkley (26) is stopped by the Tennessee Titans defense during the second half of an NFL football game Sunday, Sept. 11, 2022, in Nashville.
(AP Photo/Mark Zaleski)

Despite having an interception, Jones finished 17-for-21 with 188 passing yards and two touchdown passes. He added 25 rushing yards as well. His other touchdown pass went to Sterling Shepard on a 65-yard pass. Shepard had two catches for 71 yards.

Barkley led the Giants with 164 yards on the ground looking like his normal self. Richie James had a breakout game with five catches for 59 yards.

All of New York’s points came in the second half.

Tennessee went into the locker room up 13-0.

Tannehill had two touchdown passes in the game — both to Dontrell Hilliard. He finished 20-for-33 with 266 passing yards. Hilliard had three catches for 61 yards.

Tennessee Titans running back Dontrell Hilliard (40) celebrates as he runs to the end zone for a touchdown during the second half of an NFL football game against the New York Giants Sunday, Sept. 11, 2022, in Nashville.
(AP Photo/Mark Zaleski)

Derrick Henry led the Titans with 82 yards on 21 carries.