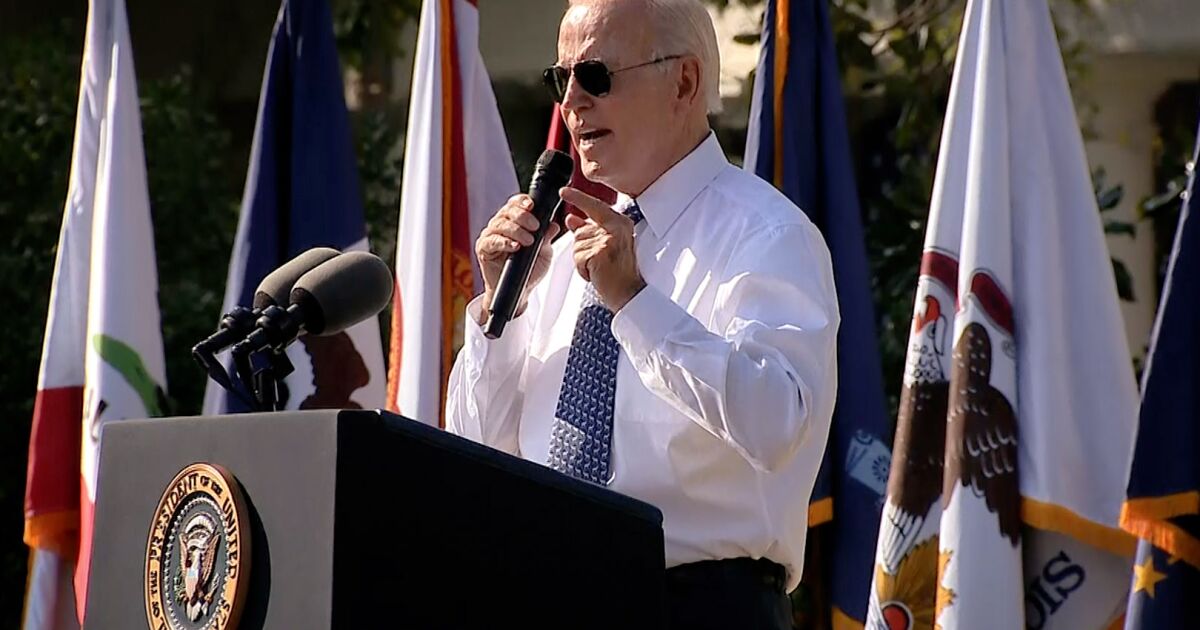 But even as Biden touted the new law, rebranded this summer as the Inflation Reduction Act, a worse-than-expected inflation report sent the Dow Jones industrial average tumbling to its worst day in two years.

Despite the rough economic news — some networks carrying Biden’s speech live ran a ticker at the bottom of the screen showing the Dow’s decline — the president, in shirtsleeves and aviator sunglasses, was ebullient as he addressed the supportive crowd on the South Lawn, declaring that in this instance, “the American people won and the special interests lost.”

The enthusiasm of the event, which James Taylor kicked off with a short set, reflected just how long Democrats had fought for what they finally achieved in this bill, which will lower prescription drug costs, accelerate the country’s transition to renewable energy, raise taxes on some corporations and lower the deficit.

As Biden and congressional leaders made a case for what they’d done over the last two years, they continued to contrast their record with the GOP’s.

Democrats hope that sharpening contrasts with Republicans, and painting them as extreme following the Jan. 6, 2021, Capitol insurrection and the Supreme Court decision overturning federal protections for abortion rights, may convince voters to look beyond the stubbornly high inflation.

And Sen. Lindsey Graham (R-S.C.) called Tuesday for a federal ban on abortions after 15 weeks of pregnancy — a puzzling political move that drew attention away from the new inflation data and seemed to buttress Biden’s argument about the GOP’s ongoing effort to chip away at abortion rights.

“While MAGA Republicans are fixated on their extremist agenda like a national abortion ban, Democrats are focused on creating jobs, lowering costs, and bringing the country together,” Schumer said.

Republicans, who have seen their advantage in polls slipping away in recent months, argued in a new strategy memo released Tuesday that the election would continue to be about the “economy and crime,” and that polling suggests GOP candidates can gain ground by convincing voters that Biden and Democrats are to blame for the higher prices of goods and services.

Although gas prices have fallen in the last few months and inflation appears to have finally peaked, new data released Tuesday showed that inflation was 8.3% year-over-year in August, down only slightly from 8.5% in July and 9.1% in June. Increased food, electricity and healthcare costs, analysts said, were the main factors in keeping overall inflation high.

The numbers could complicate Democrats’ efforts to convince voters that their actions are making a dent. Moreover, many of the cost-reducing aspects of the Inflation Reduction Act, including the cap on out-of-pocket prescription drug costs, won’t go into effect for a few more years.

Biden, in a short statement Tuesday morning, touted the legislation as a response to inflation and sought to put a positive frame on the new data, which he said showed “more progress in bringing global inflation down in the US economy.”

He added: “Overall, prices have been essentially flat in our country these last two months: that is welcome news for American families, with more work still to do.”

In his remarks later, Biden acknowledged inflation only in passing, reiterating that there was “more work to do” to lower prices. But he focused mostly on making a positive case for his record, asserting that Democrats, despite their narrow congressional majorities, had delivered substantive reforms in several policy areas.

“Making progress in a country as big and complicated as ours clearly is not easy. It never has been,” Biden said. “But with unwavering conviction, commitment and patience, progress does come.”

The Inflation Reduction Act in particular, he said, will “lower costs for American families” by lowering drug prices and other healthcare expenses, and offering new tax credits for electric vehicles and other renewable energy programs.”

Republicans, he warned, had vowed to undo it all should they win in November and take control of Congress next year.

Even with more action needed to meet Biden’s emission reduction goals, renewable energy advocates said the significance of the legislative accomplishment being celebrated could not be understated.

“This legislation will spur vital new investment that will help deploy thousands of megawatts of new renewable power, create hundreds of thousands of good-paying jobs, lower the cost of electricity for American families, and substantially reduce greenhouse gas emissions,” he said in a statement.

Biden signed the legislation into law during a smaller ceremony at the White House last month when most lawmakers were out of town. The larger gathering Tuesday came exactly eight weeks before the midterm elections that will determine whether Democrats can hold onto their thin congressional majorities.